The following guide aims to cover all the information you need to know as a juror to understand a dispute's lifecycle and its related tasks so you can have the best experience possible using the Aragon Court Dashboard. For an overview of the Dashboard and its modules, click here.

The Court's main unit of time is called a term, which is currently set to eight hours. Every time period in Aragon Court is composed of terms (e.g. the vote commit duration lasts six terms, or two days). The current term and its remaining time is always displayed at the top of the dashboard.

As for disputes, they essentially observe the following lifecycle:

Disputes can be created by any entity subscribed to Aragon Court.

Once a dispute is created, a time period of seven days is allowed to submit evidence that will later be reviewed by jurors. Evidence can be submitted in text format but HTTP and IPFS links are also accepted.

No action is required by jurors during this period.

After the evidence period is over, the first adjudication round is initiated and the Draft jury period begins. The only task required during this period is to click on the Draft jury button in the dispute page. Anybody can execute this task and receive a DAI reward proportional to the number of jurors being drafted. The current draft reward amount is Draft_Fee per juror.

Your chances of being drafted as a juror are directly proportional to your active amount of ANJ.

If you get selected as a juror, here are a few things you need to know:

The voting period is critical for a drafted juror. What you must do within the allocated time is first to review the evidence, then to try anticipating what the voting decision of the plurality of jurors will be.

This seems counterintuitive at first. Aragon Court is not exactly functioning like most legacy court systems in which every juror is asked for their unbiased opinion. If this would be the case, it would be unfair to penalize the ruling minority. Instead, jurors are incentivized to reach consensus and are rewarded or penalized accordingly.

Most importantly, it is essential to cast a vote since failing to do so will result in financial penalties for you.

Failing to cast a vote will result in your locked tokens getting slashed and redistributed to the winning jurors after the final ruling - so make sure to commit and reveal your vote in the allotted time periods.

The vote commit period lasts two days. Here are the steps required to cast a vote:

3.1 Select one of the three voting choices

Three choices are available: voting to Allow the action being disputed, voting to Block the action, or Refuse to vote. You can choose refuse to vote for many reasons, for example if you consider that the evidence was not conclusive enough or the description was incoherent. Remember that you should vote the way that you think a plurality of jurors will vote, since you will be penalized if your vote is in the minority. 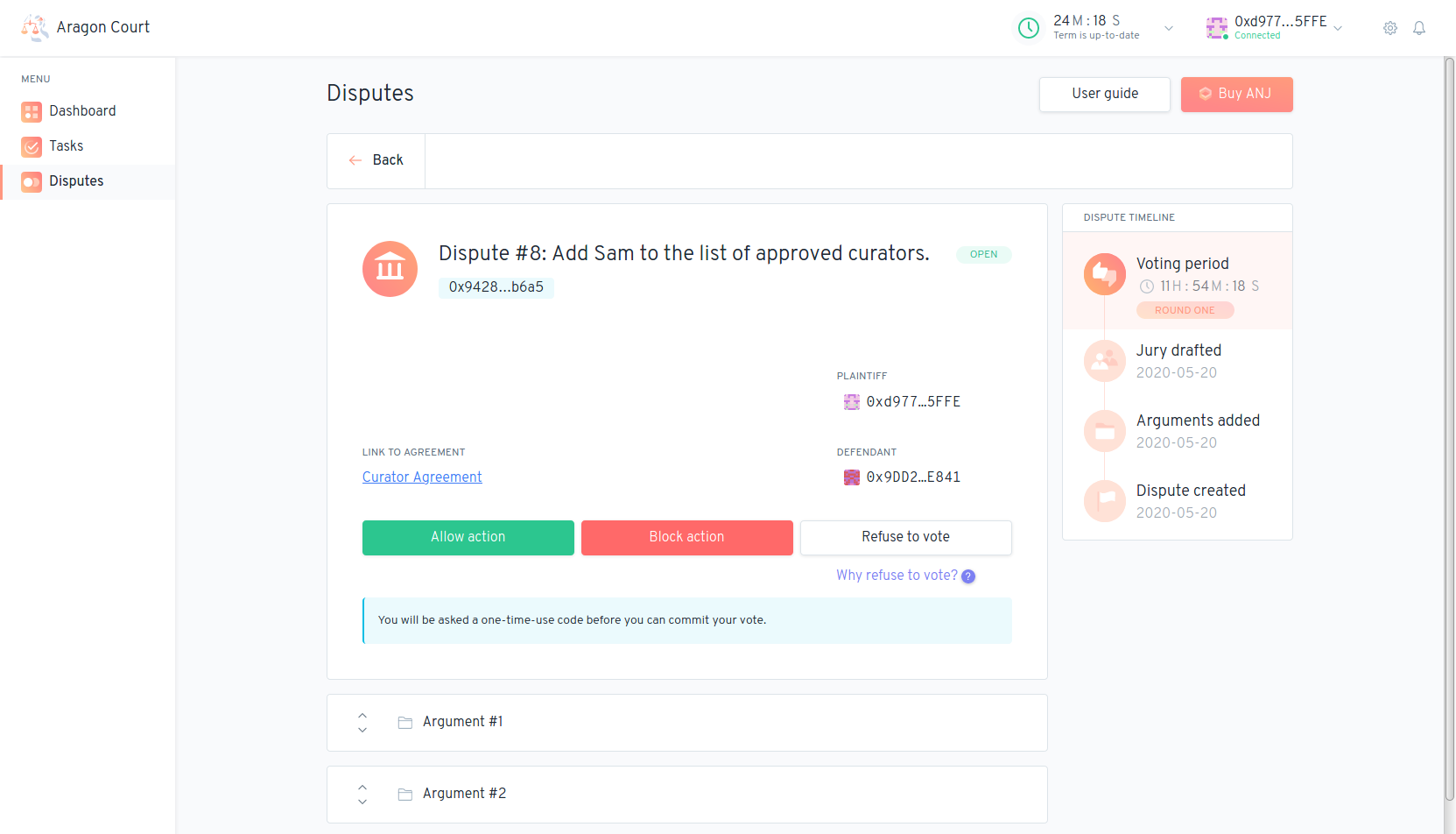 To keep the votes secret until the end of the voting period, your vote will be combined with a randomly generated code. For security purposes, it's important that you save this code somewhere safe (such as inside a password manager) and do not share it with anyone. 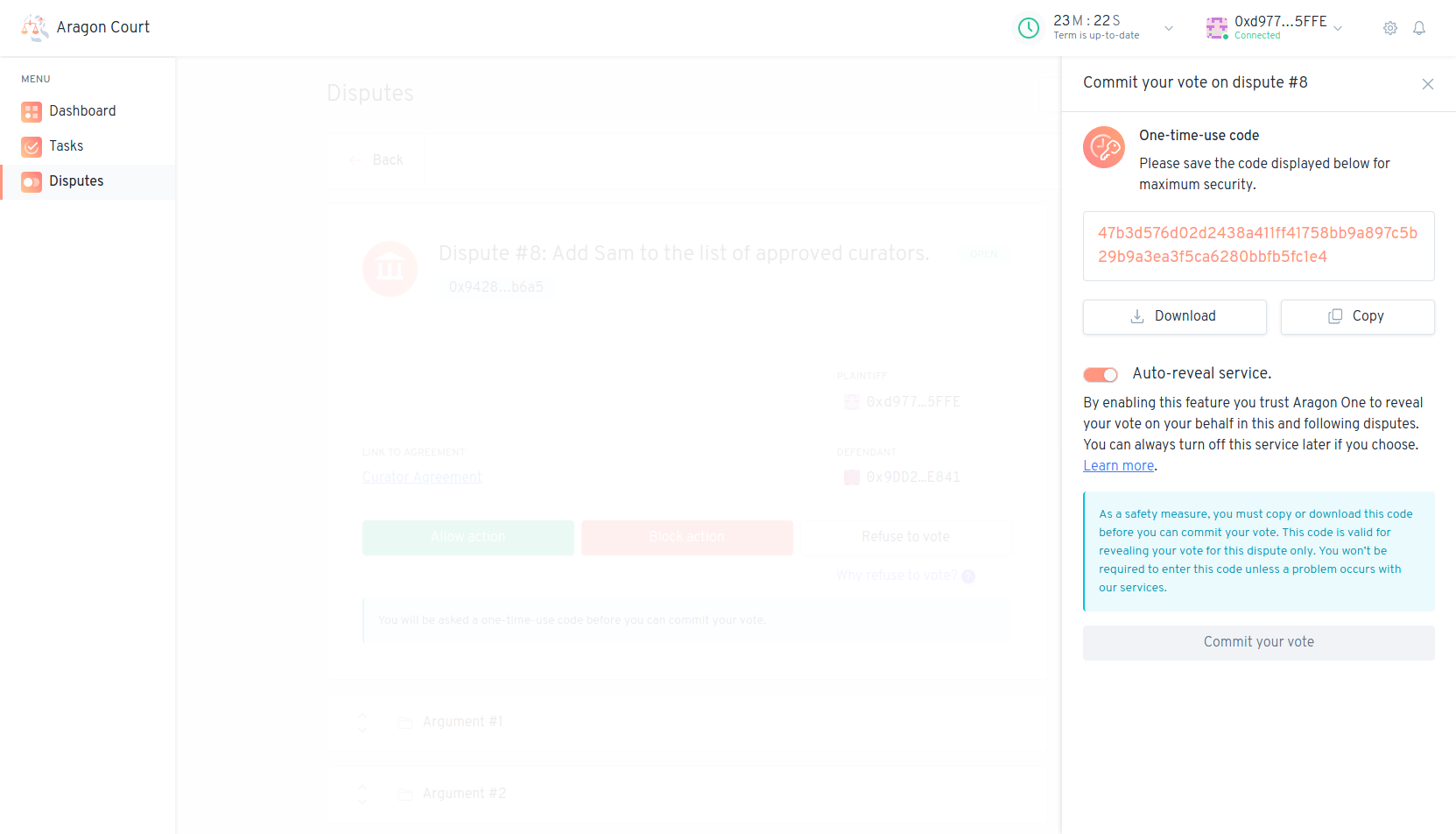 Enable Court Auto-reveal service is a convenient option available if you want your vote to be revealed automatically during the next phase. If you select this option, you are relying on Aragon One, the company that hosts the Aragon Court Dashboard at https://court.aragon.org, to cast your reveal transaction on time. Otherwise, manual action will be necessary during the Reveal period.

Click the Commit your vote button to send the transaction.

If you leak your one-time-use-code, either on accident or on purpose, you could be penalized. This will put you on the losing side of a dispute even if you cast your vote for the plurality outcome, and your locked ANJ will be redistributed to the plurality jurors after the final ruling. This mechanism is in place to dis-incentivize cheating/ collusion among jurors.

If another juror leaks their one-time-use code then you can penalize them using the following steps (this will be added to the juror dashboard for ease of use in the near future).

Step 2. Fill out the form fields with the following information:

An example of the completed form looks like this: 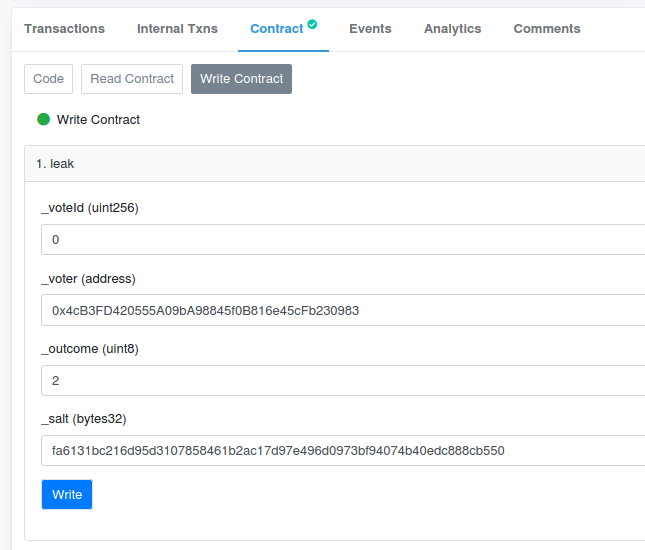 Step 3. Click the "write" button, then sign and send the transaction. Once the transaction is confirmed, the juror who leaked their one-time-use code will be penalized. 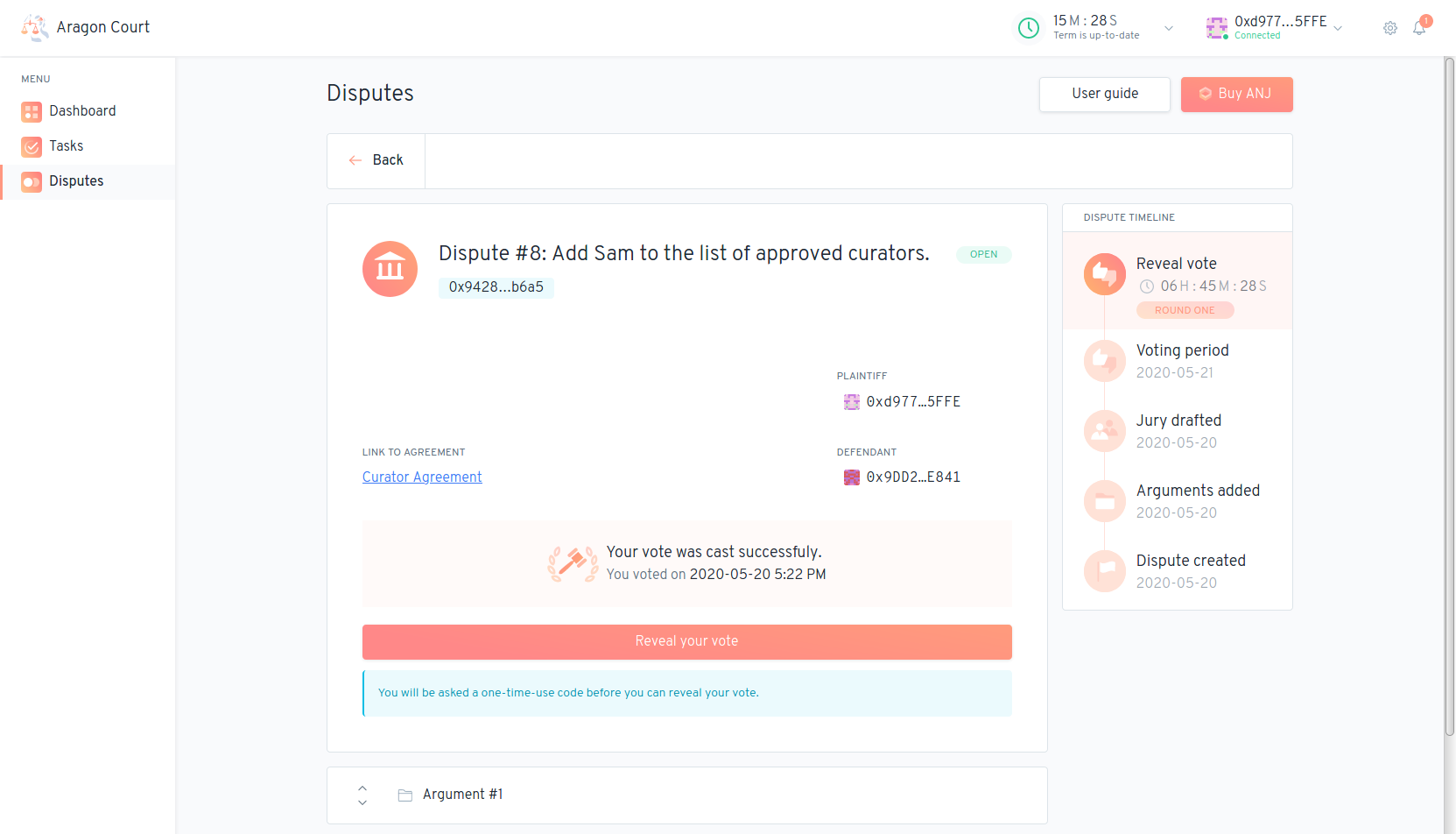 After the voting period has ended, jurors will have two days to reveal their vote.

If you enabled the Auto-reveal service, there is no action required from you at this stage. Otherwise, simply click on the Reveal your vote button. Your one-time code shouldn't be necessary unless a problem occurred within the court, but if it is needed, you'll be prompted to retrieve it from the safe place you stored it and enter it into the juror app.

Now that the votes are revealed, you can see whether you voted with the plurality or not. But before the ruling can be executed, an appeal period is started during which any user can lock DAI as collateral to propose an appeal. Appeal collateral amounts can be found in the Aragon Court FAQ.

However, an appeal must be confirmed by a second user to officially start a new round. Appeal confirmation collateral amounts can be found in the Aragon Court FAQ.

If an appeal is confirmed, a new adjudication round is initiated and a new jury is drafted. With each new appeal, the number of jurors is multiplied by three. The appeal and appeal confirmation periods both last two days.

If, as a juror, you voted with the plurality of jurors in the final ruling, congratulations! You just earned Juror_Fee and a percentage of the slashed ANJ from jurors who voted in the minority.

The maximum number of appeal rounds is not infinite, it is currently set to four. If an appeal is still confirmed after the maximum allowed is reached, a final round is initiated where the number of jurors equal to total active stake / Min_Active_Balance is drafted, in which case all drafted jurors will be required to make up and safely store a secret passphrase to vote. The auto-reveal service is currently disabled for the final appeal round, so jurors will have to manually reveal their vote with their secret passphrase during the final reveal period.